Another large catch up as I have recently spent 5 days in Norfolk and another 2 in Liverpool with Angela. We travelled up on Sunday morning (18th) and after meeting the folks in Holme for Sunday roast, we paid a visit to Titchwell Marsh RSPB so I could finally catch up with the long staying 1st Winter Coues' Arctic Redpoll - a lifer for me. The bird showed extremely well with Lesser Redpoll and a few shots were obtained. Timed to perfection as the bird has not been reported since - phew - what a relief!

As usual there were many birds on the freshmarsh and brackish (now renamed the volunteer) marsh, and several posed for photographs.

We spent Monday (19th) around the Holkham NNR but not before noting a pair of Grey Partridge from the caravan at Heacham South Beach. The marshes between Burnham Norton and Wells-next-the-sea held a Barn Owl, numerous Brent, Pink-footed and White-fronted Geese, Ruff, Avocet, and 2 Muntjac Deer and a Stoat on the mammal front. At Holkham Gap we noted 3 Wheatears (2 males) and 5 Common Scoter plus a Firecrest and several Goldcrests amongst the pines.

On Tuesday (20th) we all headed inland, via a successful Woodlark stop at Roydon Common NWT, towards Fakenham where we got good views of the long staying Great Grey Shrike which was observed catching bees and occasionally singing/calling.


While watching the Shrike, 3 Common Buzzards and 1 Sparrowhawk were noted before the star raptor appeared in the same thermal - a fantastic Red Kite that eventually sailed right over the top of us.

We moved on to the nearby Hawk & Owl Trust reserve at Sculthorpe Moor where this Water Rail and a few Lesser Repoll were performing for the cameras.

My sister joined Angela and myself on Wednesday (21st) for a walk around Hunstanton shops, noting Peregrine and lots of Fulmars during lunch on the clifftop. We moved on to the Sandringham Estate where Nuthatch (calling) and Goldcrest were added to the day list.

On Thursday (22nd) we finished our break in Norfolk at Cley NWT noting 2 Corn Buntings at Choseley drying barns on route. From the North hide we soon spotted the 2 Spoonbills, and I picked out a Pale-bellied Brent Goose in a flying flock of dark-bellied Brents.

And then it was time to head off north west to see our beloved Liverpool FC take on the mighty Wigan Athletic... more on that in the next blog post.


To round off this post.... a beautiful sunset viewed from Heacham South Beach looking out over The Wash towards Lincolnshire - magical. 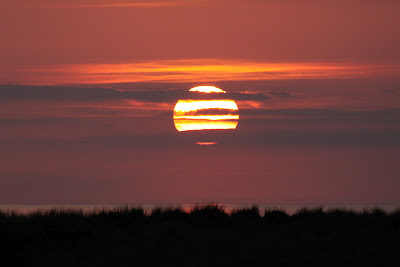