Birding in the heat.

As well as seeing the Blue Tits fledging at the weekend, a couple of visits were made to the woods and coast.

Saturday (26th) involved a trip to Dungeness but via a slightly different form of transport. Angela, our friend Graham and I drove to New Romney where we caught the RH&D train to Dungeness. Their goal was to take some photos of the scenery while I hoped to spot and photograph a few birds. Single Sand Martin, 2 House Martins and several Swallows and Swifts were moving low north, plus a male Wheatear and singing Skylarks near the fishing boats. With the clear skies and quite cool easterly breeze there were relatively few small birds and not even a raptor moving overhead. A nice snack at the railway cafe before a cramped but light hearted journey back on the train. One chap day tripping from London just couldn't understand why I spend so many days of the year down at Dungeness and on the Romney Marsh. Personally... I love the place and much prefer it to town life and cities like London.

Sunday morning (27th) was again hot but Angela and myself paid a brief visit to Kings Wood, Challock. The shade from the trees helped to take an edge off the temperature. Blackcaps, Willow Warblers and Chiffchaffs were all singing and we got good views of a male Garden Warbler singing from an Oak tree. A Turtle Dove and Coal Tit were in the same branches. A brief snatch of Tree Pipit song, but no sightings alas. Further into the forest, Green Woodpecker, Long-tailed Tit and Chaffinch were all noted and more Coal Tits were feeding young. Back with plenty of time before the Monaco GP!
Posted by Neil Burt at 19:52 No comments:

It has been a successful breeding season for the Blue Tits in our garden nestbox, as yesterday (27th) the youngsters fledged. We believe there are at least 3 juveniles around, judging by the noise and where it is coming from. Let's hope that the local domestic cat population leave them well alone. The family was still present today (28th). 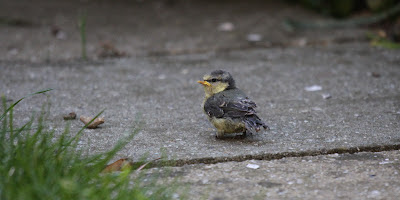 ﻿
I almost trod on this youngster when I opened the back door. It eventually dived for cover in one of the bushes.

A Goose, Yellow Wags and a Bee-eater !!!

Maybe summer is finally coming as it felt much warmer today (19th) ... and the sun was out! A drive around Orlestone Forest this morning was notable for the common birds singing but the first quality sighting was a Spottted Flycatcher at the top of School Hill at Warehorne. Down to the RM Canal, there was a Grey Heron perched on one of the depth gauge posts, a Common Buzzard and a singing Lesser Whitethroat. Arrowhead Lane held 2 each of Cuckoo and Yellow Wagtail (it was to be a good day for both of these species). ﻿﻿
Moving on to Walland Marsh another surprise Spotted Flycatcher was spotted by Mum near to the Woolpack Inn. Yellow Wagtails seemed to be plentiful too (5+), and we noted male Marsh Harrier, another Cuckoo and a Reed Warbler carrying nest material.

At Dungeness, the south end of ARC pit held a migrant Turnstone, female Wheatear and a pair of Common Terns. Not much noted on the sea during a brief look so off to the RSPB reserve. Many Hobbies and Marsh Harriers, 2 Ringed Plovers over the visitor centre, Tree Sparrow and Sedge Warblers were noted, while Dengemarsh, viewed from Springfield Bridge revealed a Bar-headed Goose with the Greylag flock, a flyby drake Garganey, Cuckoo, Yellow Wagtail and 2+ Common Buzzards amongst the many Hobbies and Marsh Harriers. Singles of Little Egret and Grey Heron too.
Out to the ranges where Galloways held Dunnock, Reed Bunting, Linnet and a juvenile Stonechat.

We then ventured back inland along the RM Canal, noting Common Buzzard at Stone Cliff, Yellowhammer, and 2 more Yellow Wagtails near Appledore. Plenty of birds singing in Park Wood, despite the early afternoon - 5+ Nightingales plus singing Garden Warbler and Blackcaps. It was here that I got a call from MH (many thanks) saying that a/the Bee-eater had been re/found back at Dunge. A diversion back to the coast was on, spotting a further Buzzard enoute. Joining the crowds along the road between the lifeboat station and the fishing boats the Bee-eater was soon located on the telegraph wires, catching bees and other insects. The light was tricky (glare and heat haze) but the bird was easily identifiable through a telescope. Just before 3pm the bird took off, headed south, circled high and then double-backed to the north, flying along the coastline towards Lade Sands and beyond. With smiles all round, it was nice to catch up with a few of the locals before heading back home, via a quick final stop at Lydd Airport, where a Yellow Wagtail (a good day for this species) was on telegraph wires.
Posted by Neil Burt at 19:55 2 comments:

Back to blogging after a break...

It has been a busy last 4-5 weeks, hence the lack of posts recently. Restructure at work is now complete and hopefully over the next few days I will be able to update with some of the sightings and photographs that I have taken in the past month...

I have still managed to get out and about, catching up with the arriving summer migrants, soaking up the sun - sorry the heavy rain !!! and jetting off for a lovely 3-day break in the city of Rome with Angela, sight-seeing (with a few bird species noted for good measure).

I'll start with a few photos:


The above shot was taken during the exceptional passage of Hirundines, Waders and Warblers between Dungeness and Rye Harbour (and elsewhere along the south coast) at the start of May. This area of Scotney GP grass on the Kent/East Sussex border was at times covered in 100's of Swallows and the odd Sand Martin. Quite a spectacle of migration - and tiredness - in action.

On the 6th the parents and I headed to Sandwich Bay Bird Observatory, hoping to see a Little Bunting. Sadly this was not to be, but I did manage to take a couple of photos of a Lapwing and a Common Sandpiper from the newly enlarged and improved Restharrow Scrape hide while dodging the hail and rain showers.

Back to Dungeness RSPB on the 7th in better weather, where 6 Hobbies performed well over Dengemarsh, viewed from Springfield Bridge. Two birds were happy to pose on the newly erected anti-predator fence!

On the 12th, Angela and myself visited one of her work colleagues, who wanted to try out my Canon 100-400mm lens for a test. I in turn tried out his Sigma lens on the garden birds. Many thanks to Heather and Mark for the cup of coffee and chat.


Angela and I then spent the afternoon at Rye Harbour NR in the company of hundreds of Gulls and Terns (six and three species respectively). A White Wagtail, several Whimbrel, 3 Little Egrets, a couple of Wheatears and a Little Ringed Plover were also noteworthy.


The 13th saw us both head to Eastwell Lake, where the parents had told us the Spotted Flycatchers had arrived back for the summer. The churchyard is a great place to see one of our last returning migrants of the spring, and we had fantastic views of at least 3 birds, 2 singing/calling males and 1+ female. 3 Blackcaps (2 males) were also present and the lake held a pair of Great Crested Grebes, a Little Grebe feeding a youngster and a pair of Mallard with 7+ ducklings.